Bauer ’55 was working as a farmer and didn’t see the need to get an education until he watched his friends going off to college. He showed up at Clark College with his transcript in hand, but didn’t think he’d be accepted since one year earlier he had dropped out of high school.

He got into Clark and graduated in 1955, then earned a master’s in education from Oregon State College. Bauer served three decades in the Washington Legislature from Clark County, while working as a teacher.

It was in the 70s, 80s and 90s that his tireless efforts to reform the K-12 system and higher education took hold. One of the pivotal moments in his long career that had a profound effect on Clark College’s community was when he paved the way for the launch of Running Start, a program allowing junior and senior high school students to take college credits tuition-free. The former teacher started down the path of education reform after having watched his students struggle to write simple sentences for essays.

Born on June 6, 1928, in Lewiston, Mont., Bauer and his family moved from Montana to LaCenter, Wash., in 1936. A father of three, grandfather of seven, and great-grandfather of two, Bauer lost his wife, Pat, in June 2002 after 49 years of marriage. He later remarried Margaret “Maggie,” who died in 2013.

When he retired,  his friends and colleagues established the Senator Al and Pat Bauer Transfer Scholarship at Clark in 2003 to honor him and in memory of his wife, Pat. The scholarships are for Clark College students transferring to Washington State University Vancouver. Many students have benefited from the scholarship since it’s inception.

Bauer is a 2000 Clark College Outstanding Alumnus, member of the class of 1955 and recipient of a 2018 presidential coin by then-president Bob Knight.

Listen to Clark College Foundation’s podcast for a funny story behind a 1988 naming of a building in Bauer’s honor, and learn about the behind-the-scenes politicking he did in the Washington State Legislature as he championed educational reform.

Read the story about the farmer who didn’t think he needed a high school or college education. 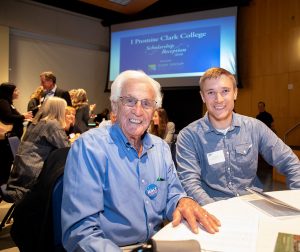 Al Bauer with two of Clark students he supports through his scholarship, Patricia E. and Senator Al Bauer Transfer Scholarship Endowment, named after his late wife. Left, Al Bauer, Bob Schaefer and Steve Oliva during an event in Vancouver, Wash., in October 2013. Annabelle Files and Al Bauer at an Outstanding Alumni Awards event in 2017.