After 1,000 hours of preparation, Penguin II rocket flies more than a mile high in Utah desert

Clark College’s Aerospace Club members left their Utah hotel at 4 a.m. on May 17 for a two-hour drive to the launch site to ensure they were called on first to deploy their homemade rocket.

“We were confident in our rocket and we wanted to set the tone for the day,” said Daniel Chapman ’14, the flight dynamics engineer for the project.

They did just that. 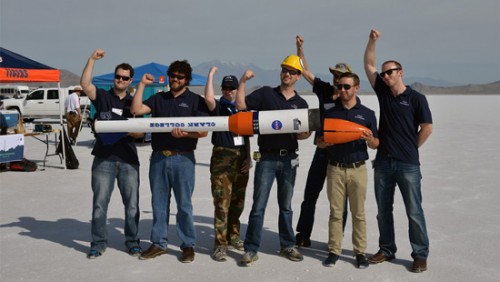 The 44-pound rocket with a 20G maximum gravitational acceleration peaked at 6,177 feet before it started descending back to the desert floor. The two parachutes deployed on schedule and with much cheer.

“Seeing it go straight up was a great achievement,” said Chapman, who was in charge of the rocket’s stability. “Seeing the chutes open was like when a football team makes the game-winning touchdown.”

Clark’s Aerospace Club worked furiously for months to prepare for this year’s launch. Success has been three years in the making. Last year, during the test launch a shift in the wind caught the nylon parachute, yanking the tail of the rocket over jagged rocks for nearly a mile before coming to a stop. The forward portion of the aft tube was crushed, and in a blink of an eye, Clark was out of the competition.

That was ancient history. This year saw nothing but success.

Clark students were up against some of the most prestigious four-year institutions in the nation during the NASA event. Cornell University, Florida A&M University and University of Colorado were just a few of the 20 teams that attended the main launch event in which 16 rockets were launched.  Clark was one of three community colleges among the field of major universities.

Though Clark’s rocket deployment was successful, they did not win any awards. However, members say being a part of the process was rewarding enough and they are hopeful next year’s launch will glean the accolades.

“The project brought home a lot of learning from the classroom to the field. I finally felt like I was doing some real engineering,” said Chapman, who will attend Washington State University Vancouver for civil engineering in the fall.

Winners whose rocket reached closest to the predicted altitude took home the gold in the form of a $5,000 scholarship from corporate sponsor, ATK Aerospace Group of Utah. The competition is organized by NASA’s Marshall Space Flight Center in Huntsville, Ala., and sponsored by NASA’s Human Exploration and Operations Mission Directorate.