David Hubbard has worked on cars since he was 15 years old. So when the 29-year-old spotted a link on Facebook about a race in which he’d have to build the car first, he thought, “Why not?”

The Rat Hard Race challenges participants to build their vehicles in 30 days for $3,000 or less. The cars—called rat rods—are custom-built cars that start with bodies and other parts from classic cars, like an early Ford Model T or 1950s Chevy. To keep the feel of a time-worn classic, no shiny new paint, rust repairs or any other cosmetic work is allowed. Anyone is welcome to participate in the open class, but to secure a spot as a competitor, racing hopefuls must first enter their names in a lottery that is drawn by sponsors at Rat Rod and Ride Hard magazines.

David Hubbard was stunned to hear his name during a video announcement. “At first I wondered if there was another David Hubbard who’d entered,” he said.

Now he had to break the news to his wife of nearly four years, Jessica, that he had entered the contest. “I didn’t tell her initially because I just didn’t think we’d get picked.” He confessed over Skype because Jessica Hubbard was on duty at Travis Air Force Base for the Air National Guard. He needn’t have worried; she was excited to get on the road. David and Jessica Hubbard met while serving in Afghanistan for the United States Air Force. They married and celebrated their first wedding anniversary during a second deployment.

They both now serve in the Air National Guard and attend Clark College. Fitting another task into their day seemed reasonable. But then they read the fine print. They had 30 days to create the rat rod from a 1951 Ford F3—a farm truck. It was August 15, and two days would be spent driving to the race in St. Louis, Mo. That left 28 days to build.

David Hubbard worked 12 straight hours each day. He only stopped long enough to attend business management classes at Clark College and study. Jessica Hubbard also worked as much as she could between prerequisite courses for the Nursing program.

“She did most of the interior, while I worked on the engine and body,” said David Hubbard. Jessica Hubbard added, “We like to say I’m the grinder, he’s the welder.”

Many of the parts were repurposed from other cars, like the truck bed’s cover. They scrapped the original wood bed cover and replaced it with a metal one from another truck. For the bed cover handle, Jessica Hubbard used the door handle of an old Model A. Because the car would be driven a minimum of 300 miles, safety was critical. David Hubbard installed new brakes and tires, which turned out to be the most expensive part of the project.

They learned some lessons before they left the Northwest. The first test run was at Portland International Raceway in Oregon. They used the car’s original engine, but the oil-sending unit leaked, leaving them with about a half quart of oil for the practice race debut. There was also a faulty water pump that had to be fixed before leaving for St. Louis.

Such occurrences were not unusual. “Most people have issues because it’s hard to test these cars ahead of time,” David Hubbard said. The couple also discovered a camaraderie and willingness to help other competitors with vehicle issues.

“Everybody helped everybody. If one person had a problem, people pitched in, whether they knew each other or not.” The rat rod line up in Lebanon, Tenn. Ready to rumble.

This sense of community was also apparent during the drive. Twelve competitors hauled their rat rods on trailers from their hometowns to the starting point in St. Louis. From there, they drove to Chattanooga, Tenn., for the Shapiro Steel Fest. David and Jessica Hubbard traveled in a group of three vehicles, each hauling trailers. One of the rat rods blew a radiator hose during the journey. Every competitor pulled over. The vehicle was a convertible and, though it had a windshield, everyone feared that boiling water had sprayed the drivers. Fortunately, the liquid was coolant, and therefore not hot. The group worked together to fix the broken radiator before getting back on the road.

After spending a day in Chattanooga, the rat rods formed a two-mile-long convoy and drove to Lebanon, Tenn., for their final stop at the 9th Annual Redneck Rumble. The Rumble is a gathering event and swap meet for classic and custom vehicles and motorcycles. It is also where the winner of the Rat Hard Race is announced.

“It was 12 acres, completely packed,” said Jessica Hubbard. “We bought a bike just to get around the swap meets and see all the other cars.”

Nine judges were embedded in the convoy to Tennessee to observe, while the public was encouraged to vote online for their favorites. The Hubbards didn’t place with the judges, but they took second place in the Web voting.

Flush with the vote of confidence from their peers, the Hubbards now had to hightail it back to Vancouver in time for class. Rat rod on trailer, they drove 44 straight hours, stopping to take quick breaks and switch drivers. They arrived home the night before the first day of the fall quarter at Clark College. The Hubbards show off their rat rod engine in Clark’s parking lot. Watch a video in the parking lot.

The experience has already incited new goals for the couple. David Hubbard got his business license and plans to turn his hobby into a business, called DJ’s Hotrods and Fabrication. In May, he will graduate from Clark with an associate degree in Business Management. He says the education he received has primed his entrepreneurial spirit. David Hubbard is also considering a second degree and certification from Clark College in the welding and fabrication program.

In the spring, Jessica Hubbard will complete her prerequisites and apply to Clark’s Nursing program.  After graduating, she plans to continue her studies at Washington State University. You must have a cool skull gear shift cover when you’re rumbling with your rat rod.

If you should hear a low, throaty rumble in Vancouver, step outside. You might just sneak a glance at the Hubbard’s tail lights. 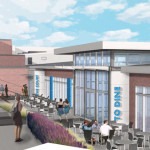